Rudy Rochman is an Israeli activist with almost 95,000 followers on Instagram

The three Israeli filmmakers that were arrested in Nigeria while shooting a documentary have reportedly been released from custody.

So happy to hear this, welcome home @rudy_rochman ❤️ pic.twitter.com/QUIAzmHFF2

Their arrest reportedly took place Friday, July 9th, during Shabbat services at a local synagogue, and the group has been in custody ever since.

Rabbi Israel Uzan, the Chabad rabbi in Nigeria, says his organization was in contact with the group delivering them kosher food and religious items.

“We are here to assist them and assist the parents with connections, with food for the boys, with everything they need for Shabbat, with tefillin,” said Uzan to the Times of Israel.

Complicating matters was the fact the group entered the country on French and American passports, an action that delayed the involvement by the Israeli Foreign Ministry.

According to media reports, Nigerian authorities reportedly arrested and interrogated the trio on suspicion that they had come into contact with anti-government separatists.

On July 14, the family released a statement confirming that the three men were detained and are fiercely disputing the claims that the group was involved in any political activity.

Rumors on Twitter first emerged earlier this month that Rochman, along with the two others and a Torah scroll they had brought with them, were detained by Nigeria’s Secret Police on July 9th at a synagogue in Ogidi, a separatist region in southeast Nigeria.

Why were they there?

Rochman and his crew were visiting Nigeria to shoot a documentary called We Were Never Lost, a film about Jewish communities in African countries.

While in Nigeria, they were visiting Ogidi, an Igbo village, spending time with the Igbo community and meeting with Igbo King Eze Chukwuemeka Eri.

Who are the Igbo?

The Igbo are one of Nigeria’s largest ethnic groups with population estimates ranging from 20 to 50 million. Some Igbo’s consider themselves to be the descendants of at least one of Israel’s lost tribes.

For generations, some Igbo have passed down versions of a migration story framed around Jacob. A common version of the story holds that Gad, the seventh son of Jacob, had three sons who settled in present-day southeastern Nigeria, which is predominantly inhabited by the Igbo.

Those sons, Eri, Arodi and Areli as mentioned in the book of Genesis, are said to have fathered clans, established kingdoms and founded towns still in existence in southeastern Nigeria today.

Igbo people who consider themselves to be Jewish trace their lineage through this story.

Some researchers have also found parallels in customs, rituals and practices between the Igbo and Jews.

Both circumcise male children eight days after birth, refrain from eating certain foods deemed unclean, mourn the dead for seven days, celebrate the new moon and conduct wedding ceremonies under a canopy, according to Remy Llona, a Nigerian author and lawyer who has written multiple books on the Igbo’s and Israel.

However, among Igbo people, the claim to be Jewish is a point of contention. Not all agree with the characterization of Igbo’s as Jews.

In Israel, Igbo’s are not considered Jewish by the Chief Rabbinate and they are not eligible for citizenship via the Law of Return unless they formally convert.

So why were the Israeli filmmakers arrested?

Details are still emerging and the family of Rochman stress that the visit was a cultural trip with zero political implications or endorsements.

Some of the Igbo people are in a state of conflict with Nigeria.

The conflict dates back to a unilateral declaration of independence by the Igbo in 1967, which ignited a violent 30-month civil war that saw over a million people killed in the conflict.

The conflict has never fully ended.

In 2021, another surge in the conflict broke out in the region and caused fighting between Nigeria and separatists in the Biafra region, where the Igbo live.

One notable separatist leader, Nnamdi Kanu, a British-Nigerian national who identifies as Jewish, resurfaced in Israel 2018, with video emerging of him praying at the Western Wall in Jerusalem’s Old City, the BBC reported.

Kanu also gave a radio broadcast saying he was in Israel and indicating he owed his survival to the Jewish state, according to the Times of Israel. Kanu heads the Indigenous People of Biafra separatist movement and the outlawed pirate radio station Radio Biafra.

He was arrested in late June 2021 and was presented before the court in Abuja, Nigeria’s capital, according to DW.

Due to the rise in conflict, the presence of the three filmmakers in the area and their visit with the Igbo community, it was believed on Twitter that this was the reason for their arrest.

Marc Rochman, Rudy’s father, responded to those allegations in a tweet.

“Their trip is cultural. They are not involved with political or separatist movements. Respect our work to clear & free them,” he wrote.

Family members of one of the men stressed to the Times of Israel that the allegations were entirely unfounded, and that separatist social media accounts took advantage of the Israelis’ trip to claim that the three were supporting Biafran separatist groups.

The filmmakers were aware of the political sensitivity surrounding the filming of the Igbo community. Last Thursday, the We Were Never Lost Facebook page posted: “We do not take any position on political movements as we are not here as politicians nor as a part of any governmental delegations.” 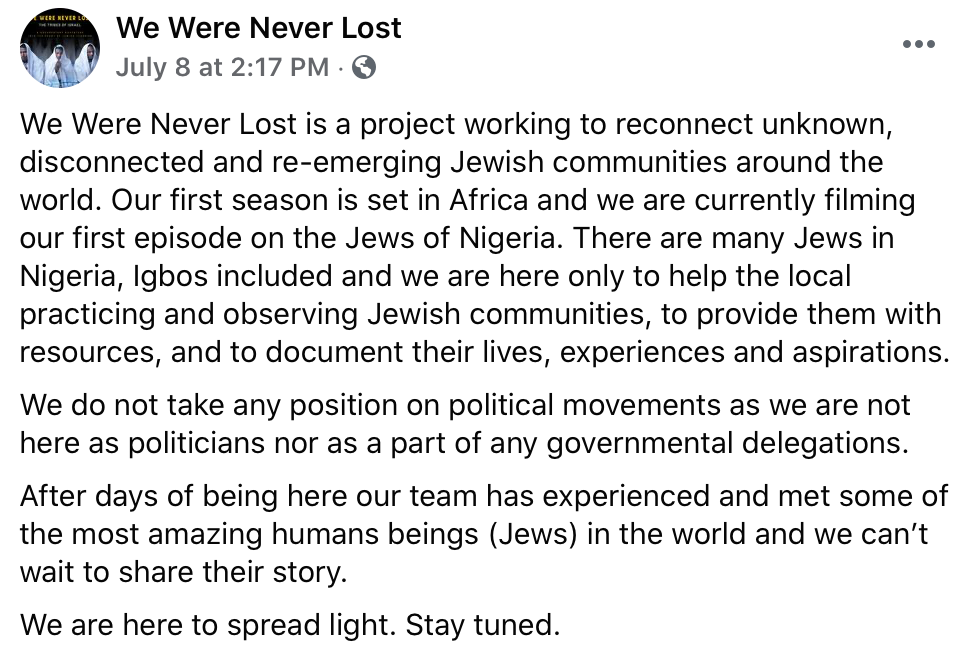 Next up in News

How immigrants shaped the Jewish state