If you’re on social media, you’ve probably heard the term ‘cheugy’ by now.

‘Cheugy’ (pronounced chew-gee) went viral after 24 year-old Hallie Cain described it as the word for the ‘type of person with millennial girl boss energy’ in a Tik Tok.

“It’s not quite ‘basic,’ which can describe someone who is a conformist or perhaps generic in their tastes, and it’s not quite ‘uncool.’ It’s not embarrassing or even always negative,” wrote New York Times reporter, Taylor Lorenz, in an article on the new word. It’s basically the opposite of trendy.

Although it’s difficult to describe exactly what chuegy is, “you know it when you see it,” Lorenz wrote.

Now, one Tik Tok user is taking cheugy to the next level. Emily Rosen says there is a specific type of cheugy that exists only within the Jewish world.

“You’ve heard of Cheugy, but have you heard of Jewgy?” she said in a Tik Tok.

So how do you know if you’re cheugy? On an Instagram story, we asked you to tell us some things that just feel ‘Jewgy.’ Based on your submissions, here’s our ultimate list of 18 things that simply are Jewgy:

And if it wasn’t already clear, this is all just silly internet banter, so let’s not take ourselves too seriously while reading this.

Snapback hats (bonus points if they are explicitly Jewish)

Nalgene water bottles — especially the ones covered in stickers

Any branded ‘swag’ from camp or youth group

Calling summer camp your “home away from home.”

Taking pictures of yourself wrapping tefillin

This is a controversial one, but some of you stood firmly by it.

Did we miss anything? Let us know what you think is ‘Jewgy’ on Instagram, Twitter and Tik Tok @JewishUnpacked

18 Jewish Tik Tokers you need to be following 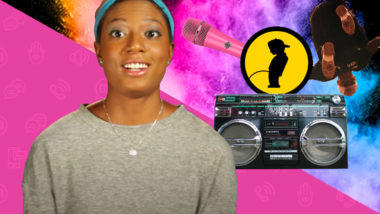 Meet the Orthodox Jewish figure skater at the Beijing Olympics

Here’s how to have a mindful summer solstice