All the Jew-ish hockey players at the Olympics

With so many Jewish players hitting the ice in Beijing, hockey wins the award for 'most Jewish' sport

The 2022 Olympic men’s hockey tournament looks very different than from past years. That’s because none of the teams have many NHL superstars competing— instead, a number of rising stars are filling out the rosters and there are quite a few Jewish players to cheer on.

In December, the NHL announced it would be opting out of the Winter Games, citing COVID-19 as the cause. More than 100 regular season games have been postponed because of the pandemic, making it “impossible” to put a pause on the season, even for the Olympics, NHL commissioner Gary Bettman said in a statement.

That meant rosters were reconstructed and filled by a combination of former NHL players, amateur players from the college ranks and major-junior level, professionals playing in leagues outside of the NHL and overseas professional leagues like Russia’s KHL.

Among the up-and-comers benefiting from the restructuring are multiple hockey players with Jewish ancestry.

Ho-Sang is Jamaican and Chinese on his father’s side and Jewish and Chilean on his mother’s side.

“I’ve grown up Jewish as my mother is Jewish,” he said in an interview. “I have always celebrated the Jewish holidays like Hanukkah and the High Holidays with family and friends.”

Ho-Sang grew up in Thornhill, a suburb of Toronto.

Prior to signing with the Marlies in 2021, he was a first round pick of the New York Islanders in 2014. He was assigned to AHL Bridgeport in 2017 and had several NHL call-ups as well as a stint playing in the Swedish Elite League.

Twenty-year-old goalie, Devon Levi will also be playing on Team Canada’s men’s hockey team. He currently plays with the Northeastern University Huskies in Boston as a prospect for the NHL’s Buffalo Sabres.

Levi is a Montrealer who grew up in the Jewish suburb of Dollard-Des-Ormeaux. He attended Beth Tikvah (Hebrew Foundation School), a Modern Orthodox Jewish day school.

Although this is his Olympic debut, it’s not his first time representing Canada on the international stage. Levi earned Canada a silver medal playing in the 2021 World Junior Ice Hockey Championships. He was named the tournament’s top goalie, despite playing with a broken rib he suffered in an early game against Germany, according to the Canadian Jewish News.

Demers, a 12-year NHLer, will provide veteran leadership in Beijing, Team Canada’s coach Jeremy Colliton said. He spent the majority of his time in the NHL playing for the San Jose Sharks and currently plays in Russia’s Kontinental Hockey League.

Demers, who grew up in Dorval, a suburb of Montreal, has Jewish roots on his father’s side of the family – although he only discovered his Jewish ancestry in his 20s.

“We all received the news at the same time. (Being Jewish) is on my father’s side of the family tree,” he explained in an interview. “It all came as a little bit of a surprise, but we welcomed it. I’m curious about every religion because it’s a different way of looking at the world. Obviously having that new-found heritage makes me curious.”

Fans have said Demers looks like a combination of Jewish actors Paul Rudd and Adam Sandler, what do you think!?

Together, Ho-Sang, Levi and Demers form a Jewish Canadian Olympic trifecta making Canada men’s hockey team “the most Jewish team in Beijing,” according to the Jewish Telegraphic Agency.

Warsofsky grew up in Marshfield, Massachusetts. He has Jewish ancestry by way of his dad but is Catholic on his mom’s side.

“My dad is Jewish and growing up we would go to my grandparents house and celebrate Hanukkah,” he told the Canadian Jewish News’ Menschwarmers podcast. “I still think (my Jewish heritage) is pretty special and I’m proud of my grandparents and my dad and everything that they’ve been through. I know the (Jewish) community really supports Jewish hockey players.”

Are you the next face of Unpacked’s YouTube channel?

This is Warsofsky’s first Olympic games, but he has represented the U.S. in national games before. He was captain of the U.S. Under-18 national team in 2007-08, winning a bronze medal at the 2008 International Ice Hockey Federation World U18 Championship. The next year, he won gold with the team.

23-year-old goalie, Strauss Mann, will also be representing Team USA on the Olympic ice.  Mann was born in Greenwich, Connecticut and graduated from the University of Michigan.

Mann, a newcomer to professional hockey, made his professional debut in September of 2021 playing for Skelleftea in the Swedish Hockey League. Prior to that, the goaltender played college hockey at the University of Michigan.

Here he is celebrating Hanukkah in college (calling it his personal Super Bowl):

It seems Mann was quite the young mensch as a teenager. In 2016, he won his local UJA’s Youth Award for community service.

“Strauss Mann is the founder and co-chair of Dress to Impress, held at The Jewish Board’s Hawthorne Campus,” an article in UJA Greenwich Jewish News read. “The program collects formal clothing that enables the young men to own their first suits to wear for job interviews.” 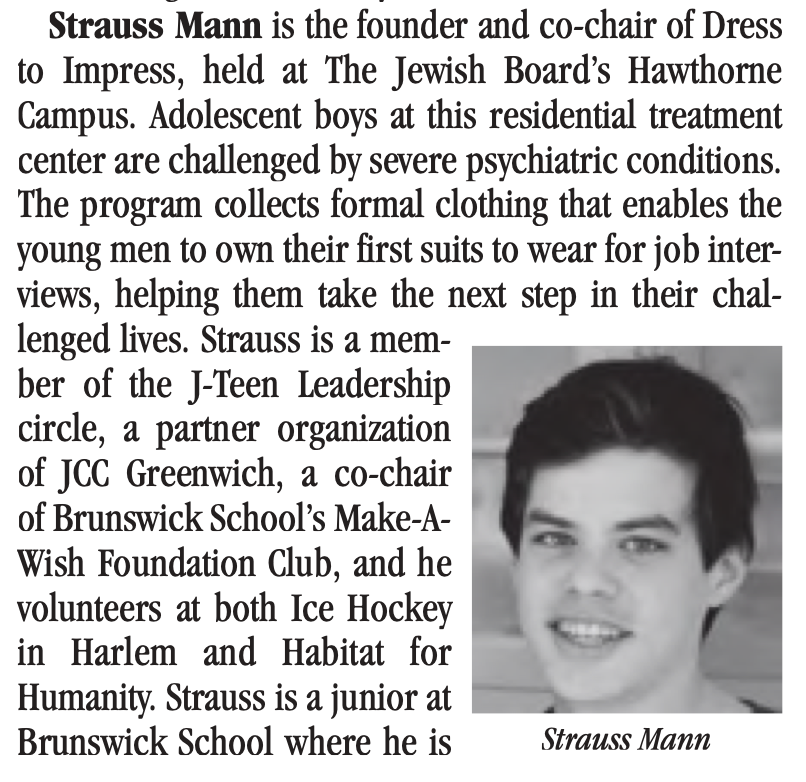 He was also involved with the ‘J-Teen Leadership circle,’ a partner organization of JCC Greenwich, served as co-chair of his high school’s Make-A-Wish Foundation Club and volunteered at both Ice Hockey in Harlem and Habitat for Humanity, according to the article.

In 2011, Mann’s cousin, Layne Kaplan, made him the subject of a TV news hit about his Bar Mitzvah for a college journalism class. Is Judaism pro-life or pro-choice? How Jewish law guides our thinking on abortion

Why I no longer say “Israel has a right to exist”

The true story behind ‘Beauty Queen of Jerusalem’

All the Jewish things you want to know about HAIM

Our favorite over the top Yiddish curses

These 10 recipes make us love apricots even more

All the Jewish things you want to know about HAIM

Who are the Jewish US Supreme Court Justices?